This Filmmaker and Entrepreneur Wants to Transform Hollywood.

Producer-actor-director Miranda Bailey wants to be a force for good in the independent film community, helping stories that otherwise might not get told find their way on to the big screen.
Toward that goal, Bailey over the last 15 years has produced 20 films, including The Squid and the Whale, The Diary of a Teenage Girl, Swiss Army Man and Don’t Think Twice. She is also the founder of three businesses.
In 2012, she launched her film-distribution company The Film Arcade and two years later, started her production and financing company Cold Iron Pictures. In 2018, Bailey and Rebecca Odes co-founded the site CherryPicks, an aggregate movie review and rating site for and about female critics.
This year, 2019, has been a big one for Bailey. CherryPicks officially went live this spring with 200 critics contributing their work to the platform. And her feature directorial debut Being Frank, starring Jim Gaffigan and Anna Gunn, will arrive in theaters on June 14.
Bailey shared her insights about what is required to run a successful creative business, and how she thrives as a woman in the traditionally male-dominated film industry. 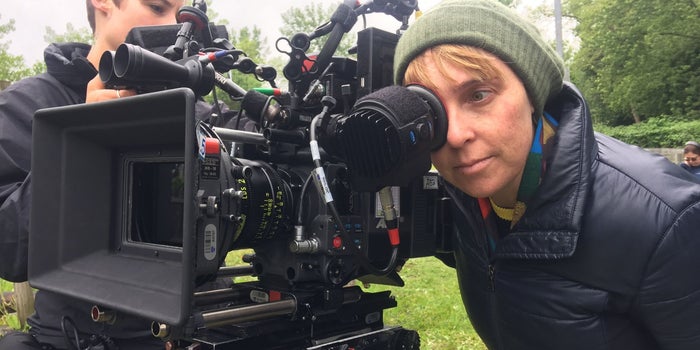 How did the idea for CherryPicks come about?
There was a film that I had produced that was written and directed and starring a woman. I think all reviews are helpful, positive or negative, but the way that men specifically spoke about this film, some of them were kind of condescending about what they felt that “the director should have done.” I had not read many reviews like that with men telling other men what they should have made.
I thought I wonder what the women think? And, Is there a way I can see all the reviews from female critics? Because essentially, that was our target audience, female viewers. [But] I couldn’t find all the women critics! I thought there needed to be a site where I can go to see what women think about this movie, or this album or this video game. I need personally, as a consumer, to be able to go somewhere where I can read what other women think about media. It didn’t exist, so I started it.
I had heard so many complaints about women critics not getting paid on time or properly. So my editorial goal is, when we hire women to write articles, we pay them the second they send the invoice. We get it to them, and everyone gets paid the same. It’s word count you get paid on and not on a status where you work or where your work has appeared. Everyone should be treated fairly if they’re writing for our site.
How did you get into producing films? Why did you want to start doing this work?
I am an actress and I studied writing and directing in New York at Skidmore College, and I came to L.A. to be an actress. And when I was acting, I had a very good time, but it wasn’t that often. And I had a couple of experiences on sets, kind of #MeToo experiences, that was very off-putting and disturbing, and it made me feel that I didn’t have control over my own art as an actor. And some of the stuff that I was doing, I would not make myself. So [I asked myself] Why am I being in it? I thought I should just make stuff that I would want to be in. Or least be proud if someone else was in it and didn’t get mistreated if there was a nude scene, let’s say.
I partnered with a friend of mine who was a director at the time, and we started something called Ambush Entertainment, and we made and financed some movies. Ultimately that partnership grew into me doing my own thing with Cold Iron Pictures because I was being stalled a lot. I got a lot of pushback for stuff that was about women that I wanted to do. At some point you just feel like, Why am I waiting for someone else to greenlight this?
Film Arcade was started out of a need for filmmakers to have a place where they can be a legitimate partner in helping create the [movie] poster, and the trailer, and what cities [their film] plays in and what Q and A’s they do. We don’t have this thing that most distributors have where you essentially just have a machine. I wanted to create a place where I would be allowed to do that, and I imagined other people would like that. It’s not easy as a distributor to stay in business. I’ve watched so many starts and fail. But there is no plan. There’s no one way to make a movie.

Since starting the first of these businesses in 2012, how have you seen the industry shift? What do you think is your impact?
I am so happy that right now I can actually get movies made and get movies distributed out there that 10 years ago pitching those or trying to get those made would be impossible because No. 1, “Where’s the guy lead? The white male lead?” And No. 2, there’s this belief that women-led movies don’t sell.
At this point, I’m both a maker and a buyer. I’m selling movies to the exhibitors. and exhibitors are the ones saying “This is what the audience wants.” But what does the audience really want? The audience wants what they’re told is worth their money. And who is telling them what is worth their money? The critics. And 78 percent of critics are white men. Cherry Picks is a way for me to somehow speed up the process of stories being told that are more inclusive. It’s an exciting time right now because I’m not the only person who feels that way.
What advice do you have for women entrepreneurs about to start something new?
So many of us, particularly women, are afraid to start something because we don’t know how to do it. I didn’t know how to produce movies before I started producing movies. I had no idea how to start or run a distribution company until I did it. But you’ve got to jump in and do it anyway because there’s only one way to learn and that is to do it. And if we are constantly held back by thinking, “What if no one likes it?” or, “What if I don’t know what I’m doing?” then we’re not going to be putting enough stuff out there to share with the world.
It’s okay to be afraid. I am terrified right now. I have a movie coming out that I directed called Being Frank and I am scared thinking about people watching my movie. It’s totally fine to be afraid to put yourself out there and start a new company, start a new project. Make a movie. Make art. But if we let the fear stop us, then we’re shortchanging everyone else, not just ourselves.