A farmer from Bilaspur, Himachal Pradesh has invented a new variety of apple that can be grown in plain, tropical, and sub-tropical weather.

In what is seen as a groundbreaking development, farmers across many states in India are successfully growing a cultivar of apples called HRMN 99. The variety, which can be grown in low altitudes (1,800 feet above sea level), has been developed by Hariman Sharma, a 65-year-old farmer from Bilaspur, Himachal Pradesh. Apple is usually cultivated at a minimum of 5,000 feet above sea level.
“After working as a labourer in other farms for many years. In 1998, I started nurturing mango orchards and began vegetable cultivation. In 1999, I purchased apple seeds from another farmer in the district and planted them. I did not have any hopes that it would grow, but I observed a small apple seedling that had sprouted. I nurtured that seedling with the little knowledge I gained from my farming experience, and let it grow,” says Hariman.
In two years, the tree started fruiting, but the fruits were small in size. To improve the quality of the apple, he grafted a stem from the apple tree with a plum tree.
“Owing to the non-availability of apple trees, I grafted it on a plum tree. It was successful, and the fruit quality was much better. They were the size of regular apples, and in an earth-shade colour with red tinges on the side. Soon, I grafted some more trees, and created a mini orchard with 8 trees. Till date, these trees continue to bear fruits, and provide a yield of 1 quintal every season which is usually in June. ” he says. 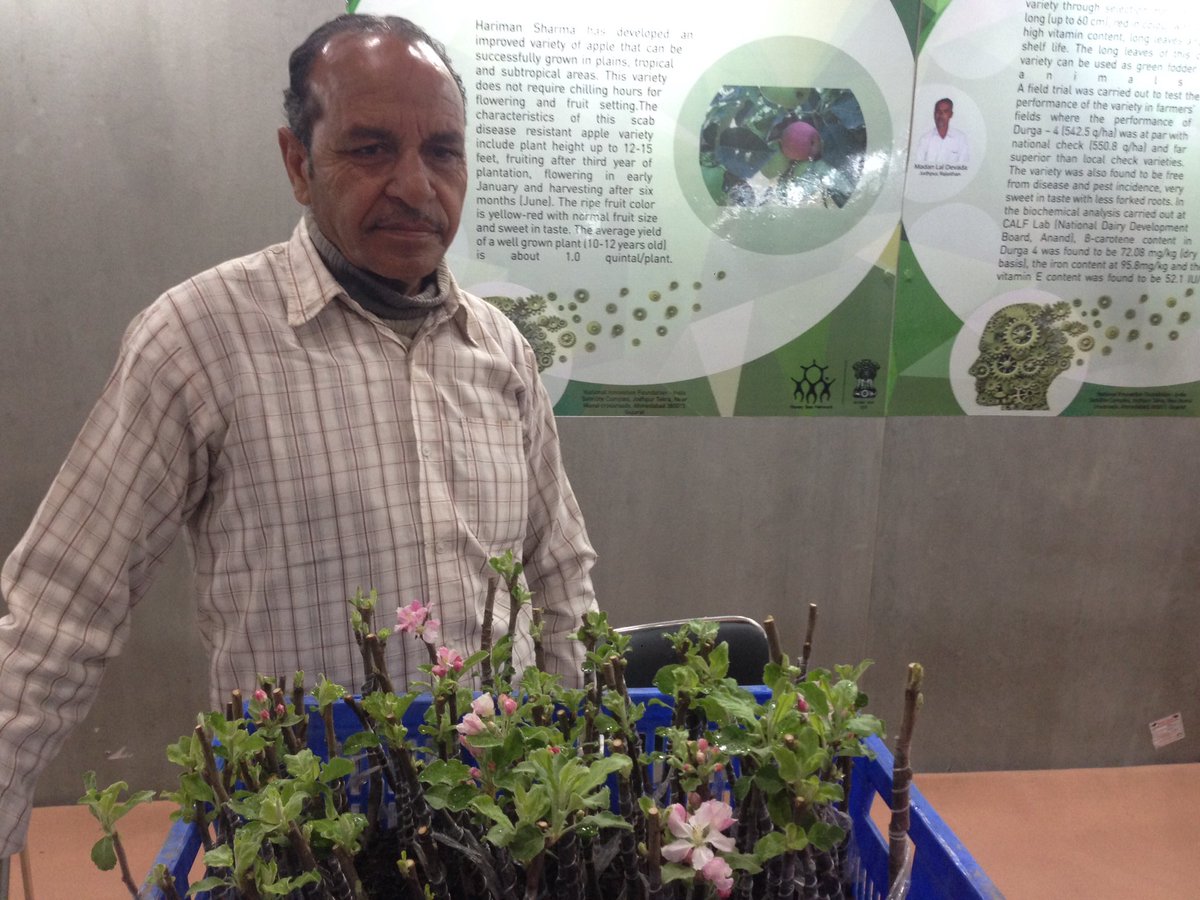 According to Hariman, this apple variety does not require chilling hours for flowering and fruit set. Chilling hours refers to the period, when the plant is maintained at a certain temperature, usually from 0-7° C, to start producing flowers. While conventional apple trees could develop improper colour and fungal spots on its surface in case of excessive rain or fog during the fruit maturity period, the new variety is resistant to scab disease.
To study the adaptability of the HRMN-99 in various agro-climatic conditions of the country, the National Innovation Foundation-India (NIF) transplanted 10,000 saplings at 1,190 farmers’ fields and 25 organisations, across 29 states and 5 union territories during 2015-2017.
Successful fruiting was observed in Manipur, Madhya Pradesh, Uttar Pradesh, Maharashtra, Gujarat, Dadra and Nagar Haveli, Karnataka, Haryana, Rajasthan Jammu, Kerala, Uttarakhand, Telangana, Himachal, and Delhi.
Hariman says, “To date, I have distributed more than 60,000 saplings of apple grafts across the country. Some, even out to places like Nepal, Germany, Bangladesh, and Africa. Apart from that, on my farm, I grow 205 varieties of plants such as mango trees, coffee plants, avocado trees, peach, litchis and more.”
In 2017, Hariman, who is now popularly known as ‘Apple man of Bilaspur’ was honoured by the then President of India Pranab Mukherjee at Rashtrapati Bhavan, for his discovery. 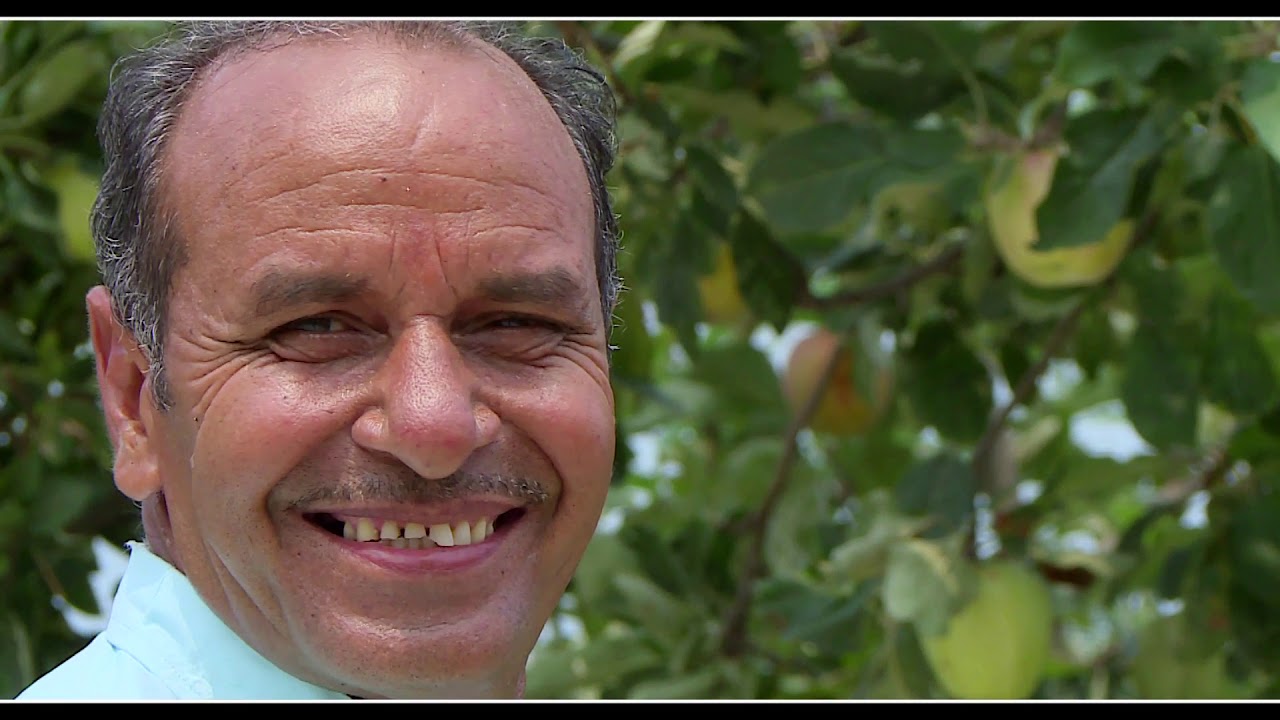 Kendra Balaji, a farmer in Telangana, Asifabad cultivates rice, pulses, cotton, and several other fruit and vegetable plants on his 13-acre land. In 2017, he cleared two acres to plant 500 HRMN 99 saplings.
“Growing apples in tropical weather is very uncommon. It requires cooling rooms and a lot of care in the first few years. Trying to grow it South of India seemed impossible, but I always loved a challenge. I came across an apple graft variety called HRMN 99 after seeing some videos on a farming group. In that video, the farmers were successfully growing it in Odisha, and to my knowledge, the weather is not cold there. With the help of the horticulture department, I procured the grafts, and even got some tips on growing it from Hariman Sharma.” 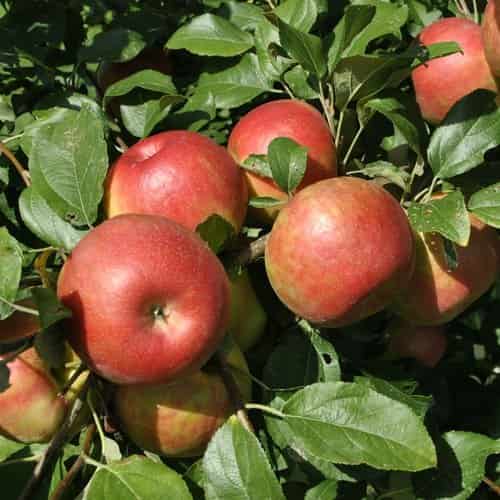 Balaji planted the saplings and set up a drip irrigation system to water them. Today, each tree bears 30 to 40 small apples, making him the first farmer in Telangana to cultivate apples. On the Telangana State Formation Day this year, Balaji even gifted a basket of these apples to CM K Chandrasekhar Rao.
Next year, he plans to sell his produce in the local markets.

Making an 18 Crore Biz from Scratch; Owner of Momomia