Being one of the most famous battles in Indian history, can you believe that the legendary Battle of Haldighati was over in just four hours? Yes, it did.

Maharana Pratap was born in the year 1540. By not falling prey to Emperor Akbar, Maharana courageously demonstrated his defiance before the Mughals. And this resulted in the ‘Battle of Haldighati’ in June 1576. The forces of Akbar were being led by Man Singh – the prince of Aamer.

The details of the battle have been meticulously documented by historians. The force of Maharana was highly outnumbered but Maharana fought with great courage. Though the short-busting battle made it to history it is still unclear who won it. While some believe it ended in a draw, many believe it was Akbar who emerged as a winner. Who was greater in the Maharana Pratap vs Akbar battle is an ever going battle and is making headlines of this article. Though both the leaders were great in their own right, the comparison is always difficult. 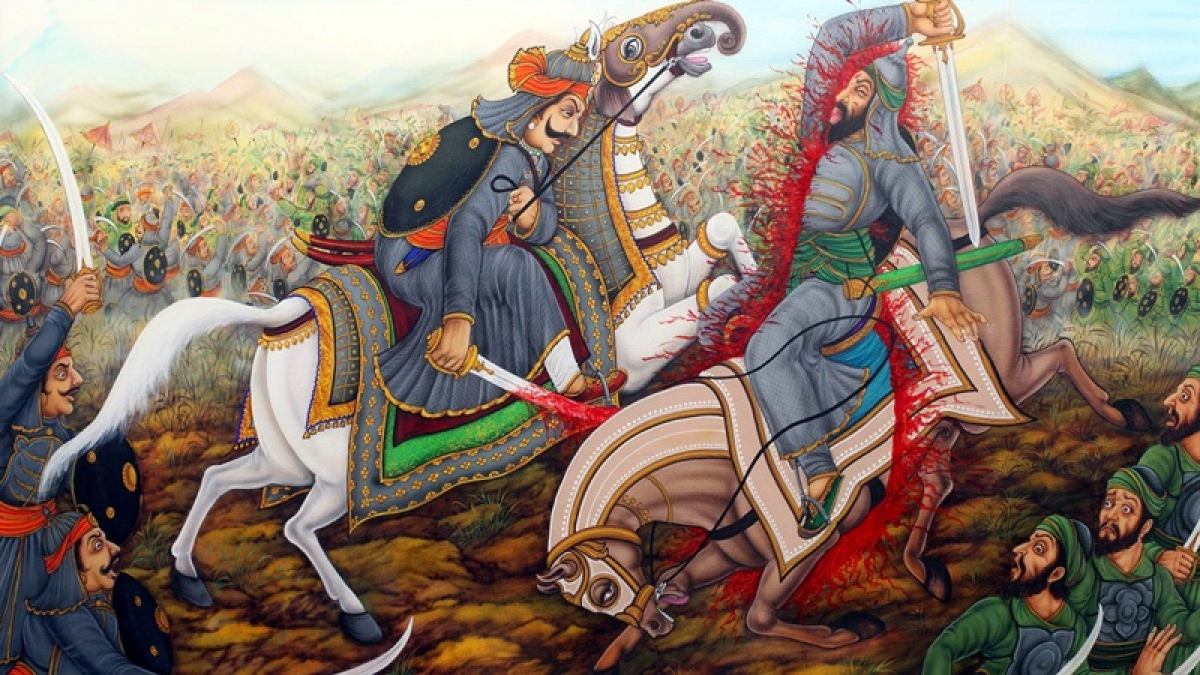 As such, Akbar’s army had 80,000 soldiers while Maharana’s army consisted of 3,000 soldiers that included Rajputs, Afghans led by Hakim Khan Sur and a small contingent of Bhil tribals.

Through Rajput’s zeal and patriotism, Maharana launched an upfront attack on the Mughal and crashed the walls of their frontline fighters. Later, in order to bring out a quick defeat launched an attack with elephants.

Rumours of the Mughal emperor Akbar coming on the battlefield instilled a sense of courage in the Mughal troops and they surrounded Maharana’s army and at the time when Maharana would have certainly been killed, the Naik ofJhala took the crown off Maharana’s head and put it on his own head posing as Maharana and got himself killed.

Grabbing an opportunity Rana aimed his spear at Man Singh but unfortunately, it pierced his Mahout’s body. The Mughal army once again surrounded Maharana but his favourite horse ‘Cheetak’ help him to rescue successfully but died as it had sustained injuries. The winner of the battle is still not clear as Mughals suffered heavy casualties and Maharana escaped unhurt.

Who won the Battle of Haldighati? The question continues to arouse controversy, 445 years after that legendary encounter. Recently, the Rajasthan Board of Secondary Education approved a revision of the Class X Social Science Textbook: it would now state that Maharana Pratap decisively defeated Akbar at Haldighati, whereas earlier textbooks had said that the battle was inconclusive.

To the perception of many historians as well, the strategic retreat of Maharana after inflicting heavy casualties can not be considered a defeat.

More than victory and defeat, what’s get counted at the end is the purpose for which you are fighting. Maharana Pratap Jayanti is observed every year throughout the country and especially by Rajputs. Have you ever wondered why the Jayanti of Man Singh is not observed if he was a winner? And he was Rajput too and eventually took over the reins of Aamer?

Despite the fact that Man Singh was a warrior too, he didn’t find a befitting place in history because he was the commander of allegedly evil forces and fighting for the glory of an empire that wanted to subsume smaller regional kingdoms, while Pratap was fighting for the right of his kingdom’s right to political and cultural sovereignty, free of the overlordship of any Mughal emperor or empire. That’s why Maharana is considered the epitome of bravery and emerged victorious in history.

The exemplary saga of valour ended nearly 18 years after Maharana’s death. On January 29, 1597, at the age of 57, Maharana died due to injuries sustained in a hunting accident. A warrior all through his life, Maharana had regained control over most of his kingdom before his death and eventually won the war.

The man with might will always be remembered as an epitome of patriotism, heroism and his spirit of independence. And Haldiighati will always remember a great warrior of Rajputana.

Born in the year 1963 in a traditional Rajput family, Dr. Rathore grew up in Balaghat, a small and peaceful town in Central India, where his early education took place. After having spent his childhood and adolescence on the Sandy banks of Wainganga River, he went to Govt. Engineering College, Jabalpur. He completed his Master’s Degree from Govt. Engineering College, Raipur in 1992. He was only 30 years old when he wrote his first National Award Winning paper. He has since written a couple of books and over a hundred research papers.

In 2002, he was awarded Ph.D. in Civil Engineering. Being an active member of several professional bodies and an avid student of timely issues, he eventually rose to the level of Vice-Chancellor. He lives in Nagpur, Maharashtra, with his mother, wife, and two beautiful daughters.

5 thoughts on “Who Won The Battle of Haldighati?”

Narak Chaturdashi: The Story of Shri Krishna and Satyabhama’s victory over evil